By Robert KimballMay 16, 2019No Comments

Welcome back to my Beer Blog and thanks for reading the 8th edition of my Beverage Evolution!

If this is your first time reading any of my blogs, please go back when you have a few minutes and read the previous editions.  Let me know what you think, comment below on our blog page or on our Facebook post where you likely found this edition.

In this edition I am going to focus on one of the most popular beer styles. The IPA, or India Pale Ale.  Although I quite likely have more experience than most people with regards to beer styles and an absolute passion for the craft and import beer world, I am not a professional or formally educated in the industry.  I do however, take a lot of pride in learning about the industry and the craft.  I may make the odd mistake so please accept my apologies if I misrepresent a style or if I am a little bit off on what I write about.  This is all based on my personal experience and some of what I have learned over the last half a decade or so from research and experimenting with different beers, styles and breweries.

Alright, back to the good stuff. IPA is one of the most interesting styles.  It is more or less a solid foundation style for beer that allows breweries to take a huge amount of creative licensing with, therefor it has more sub-styles than any other type of beer out there. Although this is actually an Imperial IPA (Imperial is the traditional name for Double IPAs) it is what most traditional IPAs tended to look like. Pivot by Picaroons is a series in which they use the same grains but “pivot” by highlighting different hops in each release.

A little salute to the history of IPA.

IPA is a derivative of Pale Ale.  It got its name “India” Pale Ale because it started as a Pale Ale but was excessively hopped in an effort to better preserve the ale and help it to survive the long journey from the UK with the East India Trading Company to other regions east of Europe.  Hops are the flower of the hop plant, they are also referred to as the seed cones or most often just “cones”.  They contain Lupulin which is a combination of resin and oils that almost has the look and consistency of pollen and that is where a large part of the flavor and aroma comes from.  Hops are used to add flavor, aroma and originally were primarily used to help preserve the beer.  IPAs have been around since the late 18th century.  They are hugely popular in North America and quickly becoming the most popular style worldwide. I am often asked what my favorite beer is –

and I have an answer for that which is (I think) a fair one. I have three favorites…  You’re probably thinking, well you have to pick one, and you’d be forgiven for thinking that, but let me explain.

My all-time favorite is a Belgian Quad called Abt 12 by St Bernardus, BUT… even though I have relatively frequent access to it, I have only ever bought it twice in 5 years.  It was my most memorable beer as far as favorite beers are concerned.

Now, if I had to pick a beer for the last beer I ever had, it would be a beer called Hu Jon by Trailway.  I call it my last meal beer.  If I was only allowed one beer to be my last, it would be that, so does that not qualify as my favorite..?

Well, if you asked me what beer I would pick if I could only drink one beer for the rest of my life (my stuck on a deserted island with only one kind of beer but unlimited supplies of that beer), it would be Luster by Trailway Brewing in Fredericton, NB.

You are probably beginning to wonder what all this has to do with IPAs..?  Two out of three of my “favorite” beers are IPAs. Hu Jon is a Hazy, Juicy, New England style IPA and Luster is a “Session” IPA.  The term “session” is used to elude to the fact that the beer could be drank for an entire session of drinking, meaning it is light, refreshing and easy to enjoy more than just a few of…

Back to the previous statement of how breweries are using this very versatile style to create many sub-categories of IPAs.

It used to be that you had two types of IPAs, American and British. The American was usually more citrusy and had notes of pine, also had more aroma, whereas the British style was often more malty and leaned more on the bitter side than the citrusy side.  Then, there came the West Coast style IPA, quickly followed by the East Coast IPA.  This in my opinion started with the East being slightly more piney and the West being more tropical, but that has since changed to almost the opposite with the relatively recent explosion of the New England IPA or commonly referred to as the “NEIPA”.  Since the West Coast IPA, this style has to be the biggest and trendiest IPA style to have been launched.

In between all of the above styles, there have been many more, the previously mentioned Session IPA (or SIPA), the Black IPA which is almost a stout and IPA mixed 50/50.  It has the IPA characters combined with the black and malty side of a Stout, with notes of coffee and chocolate.  The red IPA, the India Pale Lager (don’t get me started on that…), the White IPA (brewed with Wheat), the Double (or Imperial) and Triple IPA (DIPA and TRIPA), Belgian IPA, Rye IPA and many other highly hopped ales which tread very closely to the IPA territory.  Now, we are seeing Milkshake Smoothie IPAs with fruit added and lactose, and my personal favorite new variety of IPA, the Sour IPA.  This is a very difficult task, to have an IPA taste good as a sour beer is not easy.  To balance the sour with the pine notes and tropical hops is a lot to ask, but some have done it very well.  Bellwoods in Toronto Ontario for example makes a wonderful Sour IPA. 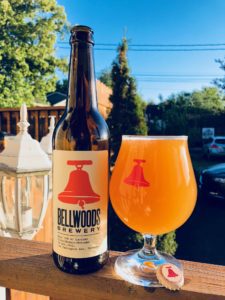 I could write forever about IPAs, so in the interest of an easy read I will leave you with a few pictures of the beer styles I highlighted above and encourage you to find your favorite IPA… 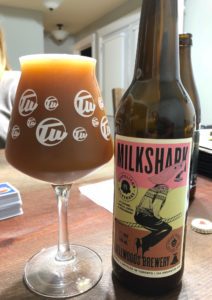 I know… not the most appealing color for a beer, but I included this one just to show you how creative breweries can and do get with IPAs. This is a Neapolitan Milkshake IPA with Vanilla, Strawberries and Cocoa. Bellwoods’ “Milkshark” incredibly tastes like beer infused with Neapolitan Ice Cream and yet somehow, it was pretty darn good. Trailway, Black Hops. Yes, this is actually an IPA too… One of the best Black IPAs on the market..!

Night Shift Brewing, “The 87” is a hoppy, tasty, boozy Double IPA from the states. One of the most well-known pioneers of the Session IPA style and quite likely my favorite is the “All Day IPA” by Founders. I strongly recommend sourcing out this brewery. You will thank me. Without a doubt, the juiciest beer I’ve ever had. The Collective Arts “Liquid Art Fest” is another Milkshake Style IPA, brewed with Lactose, Passion Fruit and Mango. 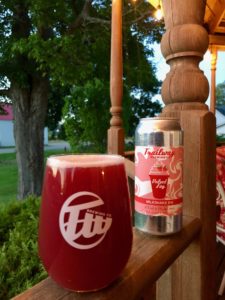 One of the fruitiest IPAs out there is the Velvet Fog series by Trailway. They rotate their IPA with a blend of lactose and various fruits and berries when in season. This release was their Raspberry Orange Velvet Fog. 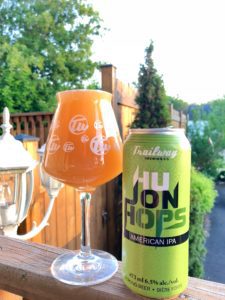 And I could not blog about IPAs without this one..! Hu Jon by Trailway, is an absolute game changer that turned me into an IPA monster. I’ve loved IPAs for a long, long time, but this one a few years ago changed everything. It is an absolute stellar beer. 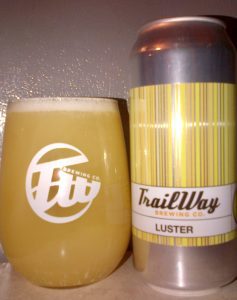 Last but certainly not least, Luster by Trailway. I chose to post a picture of the original can art as it was the one that I first drank out of and I wanted to pay tribute to the art on their earliest cans of beer, which so many loved. Luster is a Session IPA and just look at that color. I can almost taste it. For that matter, I’m going to go have a beer now… Cheers..!

If you didn’t find this blog by already liking and following our Facebook Page for Pearson Insurance, make sure you go and like and follow us..! We will be having a Craft Beer related contests over the next month.

As always, thanks again for reading!

Stay tuned for Vol. 9 of my Beverage Evolution…